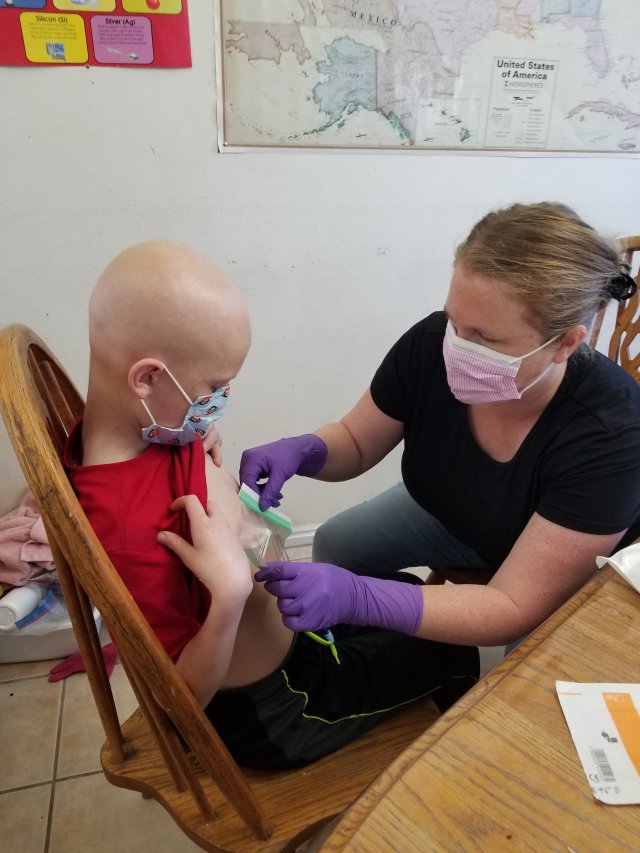 Since we were getting the MRI at a hospital that may or may not have nurses capable of accessing Eli’s port, we had home health come and do it at home. It went well and the nurse left. Quite soon, though, Eli started complaining that it hurt. I tried to get a sense of the cause of his pain, but I wasn’t able to adequately interpret his description. I texted the nurse, but I knew she was off to the next child, so I wasn’t sure that she could come back before we had to leave. Eli finally decided it was the dressing that covered the port that might be the problem. So, I mustered up my all around awesomeness and set to work taking off the dressing and putting on a new one.

When Eli first had his port, they always used a Tegaderm dressing for his port. Within a few weeks, however, his skin broke out in a rash every time he was accessed. So, after some trial and error, we found a dressing that works without causing a rash: Opsite. One downside to using Opsite dressings is that they aren’t as easy to handle as Tegaderm. We also discovered that the various locations where he is accessed don’t always have this type on hand, so I carry extras in my purse.

While I’ve seen it done many times, this was my first time to put a dressing on Eli’s port access. I managed to get the first one off and a new Opsite on with little difficulty.

Changing the dressing solved the problem. The best part about it is that Eli keeps praising me for how it was th best dressing application for him, ever. Now I have another superpower.

We are now waiting for the MRI. Eli picked out a couple movies to watch to get him through the next three hours (they hope it will be less). Since nothing has gone smoothly, I was going to mention almost being sideswiped by a drowsy driver on the way here, but was interrupted by the staff here to tell me that the MRI machine isn’t coming up after some routine maintenance. So, now we are back to square one.