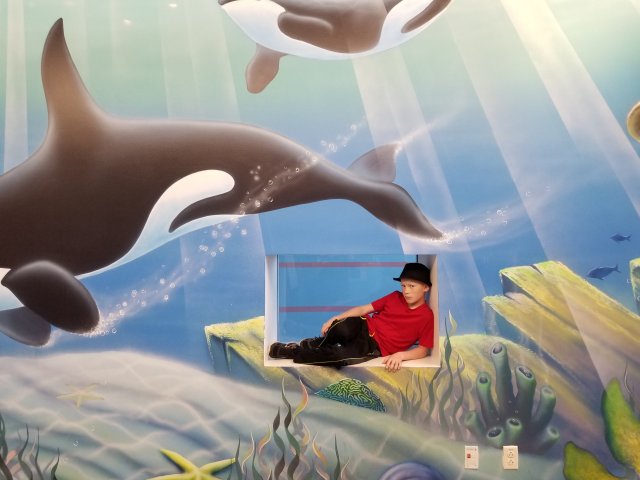 This is end of treatment scan week. Murphy’s Law seems hard at work. To start, I’ve been a little more anxious than last time and my usual equilibrium hasn’t been as stable as I like. As with past scans, I’ve been avoiding making scheduling decisions for a couple weeks until I have the reassurance that the past scans have brought. I employed my superpowers when everything was being scheduled to make sure that all would go smoothly.

Unfortunately, when dealing with ordinary humans, even my administrative superpowers are not always enough to overcome their fallibility. Monday morning, Adam dropped Eli and me off at the hospital near his work, where the MRI was scheduled. Previously, when we had scans there, not enough time had been scheduled for the three areas to be scanned, which led to delays, etc. I used it as a learning opportunity and remind them that we need three hours for the MRI. Yes, three. Even my two year old can count that high (I can imagine Adam reading this and getting to this point and telling me not to be so harsh, well sorry, I promise not to name names).

So, as usual, I reminded them that the MRI needed orders and time for the three areas. Somehow this didn’t filter to the right people and only one hour waa scheduled. So when they sat us down to explain this, I called our team to figure out what to do. I discovered that the clinic appointment that had been scheduled that afternoon, in spite of the concerns I expressed about doing it before Wednesday’s PET/CT, had been rescheduled without informing me (for the very reasons I had been assured were not an issue). To top it off, their video system was down and Eli would have been boree to tears.

We rescheduled for later this week and hoped the video system would be functional.

Last night, Eli discovered what appears to me to be a swollen lymph node. It has been almost a year since he first brought to my attention the first swollen lymph node in the left pelvis to my attention. This current one is in the right pelvis. I had no reason to think that the scans would reveal anything adverse until now. I’m hoping that my assessment of the lump/bump is wrong. Sometimes I just want to be wrong. That would be an interesting superpower, to always be wrong (makes me think of a book series our family listened to while traveling: Alcatraz Versus the Evil Librarians).

Today the scheduler, who is feeling really bad about everything, found an opening at another facility a day sooner than what we’d rescheduled, so we moved it up a bit. The other facility has newer equipment, so hopefully their video system is working.

This afternoon, just when I’d been thinking that we’d straightened everything out as best we could, the scheduler called again to inform me that the PET/CT equipment was down. This is the one that is only available one day a week. I had also been counting on it for some answers to the lymp node issue. They moved his appointment later in the day in the hopes that it will be fixed by then. I guess machines are fallible, too. Even my superpowers couldn’t have avoided that one. Unfortunately, a later appointment means that Eli will have to be hungry longer, since that scan requires him to fast. Oh, the joys.

Please pray for Eli’s scans to be clear and for the PET/CT to be fixed in time for his appointment tomorrow.

P.S. I aam actually generally happy with Eli’s care. This is more the exception rather than the rule.