When Eli had his biopsy to confirm his cancer diagnosis, the surgeon put in a port. It is a device inserted under the skin through which his chemotherapy medications can be administered. It can also be used for imaging contrast, which is what we are using it for today for an MRI that will help determine radiation dosage. Blood, for labs, is also collected through Eli’s port.

The port has has a tube that is inserted through a blood vessel into Eli’s heart. The other end is the bump on the lower right area of his chest. This is where, when meds are administered or blood is drawn, a 3/4 inch long needle is inserted through the skin and a self healing silicone membrane into the port.

There are three little bumps, which can be felt through the skin, that help guide needle insertion.

Before leaving for an appointment, I have to remember to put on a cream that numbs the skin around the port.

The first time I had to do this, I forgot to get Glad Press & Seal before his appointment. Oops! Once I realized that I didn’t have this in order to keep the numbing cream in place, I quickly posted to the neighborhood Facebook group asking for some. About 5 minutes later a kind neighbor dropped some off at our house. Thank you! 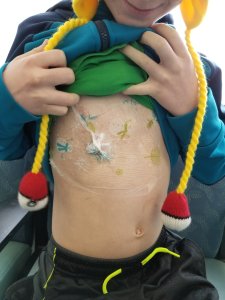 When we take Eli to his appointment and needs to be accessed (pretty much every appointment), we are sent to the port room first. Eli pulls up his shirt and we put on masks to reduce the risk of infection.

Antiseptic is applied and allowed to dry.

Eli counts down from 3, then the nurse inserts the needle. 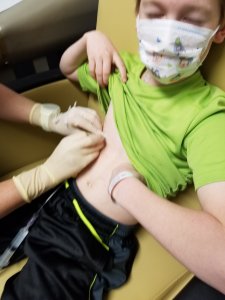 The needle with tubing is taped in place.

An adhesive dressing is placed over the accessed port to reduce the risk of infection and keep the area sterile. 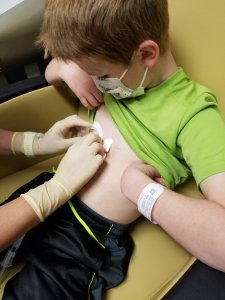 Around the beginning of December, the skin around Eli’s port broke out in a rash. They’ve been using more sensitive dressings since then. I had been using a dressing provided by the hospital to keep the numbing cream in place, but am back to using the press and seal product since it is less irritating to the skin.

At a typical visit, after Eli’s port is accessed, blood is drawn. If the labs come back with good numbers, then the chemo is administered. This is how it was administered most of the time, but they adopted a nationwide standard that has them administer it through an IV instead.

Eli decided to hang out with sea creatures while waiting for his MRI.

2 thoughts on “All about ports”