Earlier this week we started chemo again with an overnight stay. It also coincided with the first of 28 radiation treatments. Yay, death to any tumor cells that may still be lurking about Eli’s leg. The first day, PCH sent us over to Huntsman in a van equipped with a wheelchair lift so Eli could ride comfortably without having to get in and out of his wheelchair while going to and from the hospital.

The radiation session was uneventful, but I sent Adam to pick up Panda Express and meet us back at PCH so that we could eat immediately upon returning (neither Eli nor I had managed to eat lunch before driving up to the hospital earlier in the day). We finally got to eat about 4pm.

While waiting for Eli to be sufficiently hydrated to start chemo, we discovered that someone had set up a virtual reality system in the school room, so we got to try it out. I tried it, too. It was really cool. 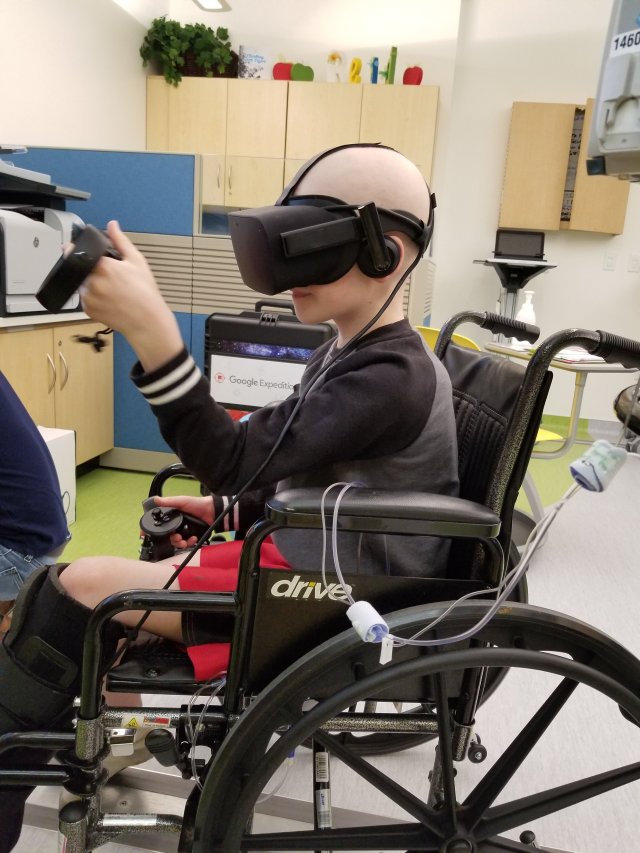 Relatives visited in the evening, only to discover that no non-sibling children were aloud to visit. 😔 But Eli’s aunt and uncle took turns going up to Eli’s room.

I remembered to remind the staff to give Eli the appropriate anti-nausea med before it was too late and Eli didn’t throw up this time.

The next day we had radiation again, so we decided to try and go to the surplus store nearby after we checked out of the hospital and before the radiation appointment. The attempt failed miserably as we started to slide down the snow covered road. We returned to PCH to park and had to take a series of elevators, skybridges, and long corridors to get to Huntsman.

One of my many questions was “where, exactly, is being treated by the radiation?”. So I printed out a picture of a skeleton with the outline of a body so the doctor could indicate the areas on my diagram. One of the things I like about the radiation oncologist is how precisely he answers my questions. It seems there is much less guesswork with radiation than other fields of medicine. 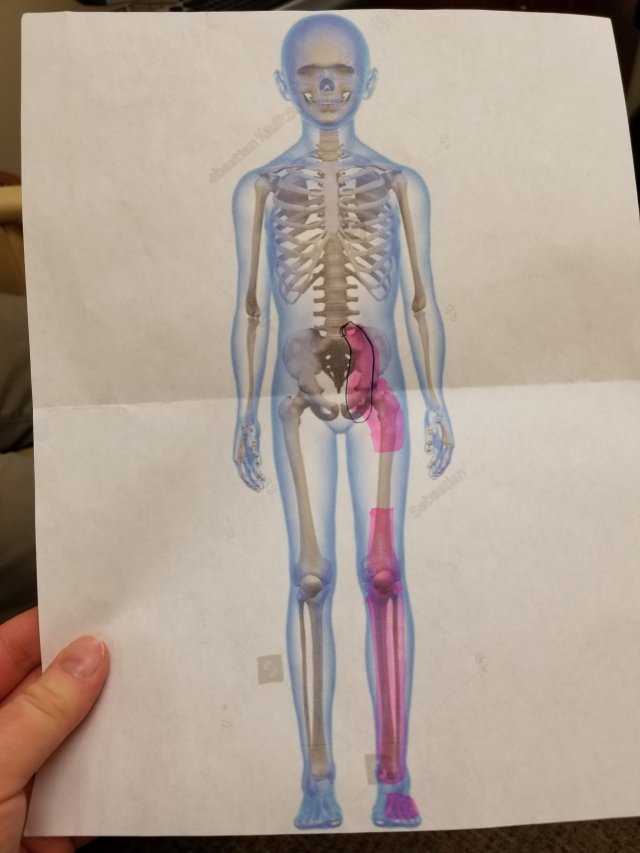 The areas highlighted in pink are being treated. Notice that most, but not all, of the foot is highlighted? The toes are not being treated and neither is the first metatarsal, but pretty much the rest will be. He was very exact about where he highlighted. He also showed me some computer scans and diagrams that show where the beams of radiation are and how they use multiple beams from multiple directions to treat as precisely as possible the area affected by cancer and leave healthy tissue untouched as much as possible. Unfortunately, there are many areas to treat, so there will be a lot of collateral damage.

The treatment area is based on scans from November when the tumors and lymph nodes were at their largest, plus a small margin.